The history of THE town of Pittenweem

Created a royal burg in the 15th century, and with a fascinating and eventful history, Pittenweem is one of the most interesting, pleasant and picturesque towns in Fife.

The town of Pittenweem was first created into a burgh by James III. The name derives from Pictish “pett” meaning “place or location” and the Scottish Gaelic ending “-enweem” meaning “off or related to the caves”.

The cave referred to in the town's name is almost certainly St. Fillan’s cave, which still exists today. According to legend St. Fillan came to Scotland from Ireland in 717 together with his Irish princess-mother St. Kentigerna, his Irish prince-uncle St. Comgan, and his siblings. St. Fillan settled in Pittenweem in the late 8th century.

The town, with its picturesque white houses and red roofs in the classic East Neuk style, clusters around a small circular harbour. The harbour itself is home to one of Scotland's last active fishing fleets, and a busy fish market is held almost every weekday morning. Erection of the breakwaters began in the 16th century. The prominent tower on the outer pier was added much later in 1865.

An annual arts festival is held every August, with events taking place in galleries, home studios and other venues throughout Pittenweem.

Pittenweem is well worth a visit, and is one of the most attractive of the many interesting villages along the East Neuk coastline. 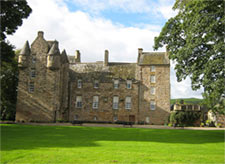 The earliest known records of Kellie go back to 1150. The first known owner of the castle was Robert of London. Originally a tower house, the oldest parts of the current building date from the 14th century and include magnificent plaster ceilings, painted panelling and fine furniture designed by Sir Robert Lorimer. The building also contains a long-concealed mural by the celebrated Arts & Crafts pioneer, Phoebe Anna Traquair. The building has been owned by many prominent families, though it is mostly connected with the Earls of Kellie. The last residents were the sculptor Hew Lorimer and his wife Mary. The castle was purchased by The National Trust For Scotland in 1970.

The grounds, and the castle's arts and crafts garden, are an attraction in their own right, with acres of woodland walks, a bird hide and an abundance of flora and fauna. 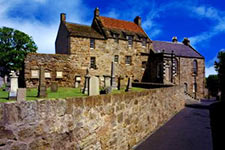 Originally a Benedictine community, the Priory relocated from the Isle of May to Pittenweem in 1318. The priory was placed under the control of the Augustinian canons of St Andrews Priory. It later formed the caput of the Barony and Lordship of Pittenweem, and remained so until the Abolition of Feudal Tenure Act in 2004 (after which all baronies in Scotland became independent dignities).

The Priory was built over the ancient sacred cave associated with Saint Fillan. The cave, recently fitted out as a chapel, was rediscovered in the early 1900s and is now open to the public. From this rough dwelling, Fillan is said to have converted the local Pictish population to Christianity. The cave has flat rocks that are presumed to be 'beds' and also a small spring of holy water.

Much of the fortified east gatehouse of the priory survives (15th century), as does the 'Great House', one of Scotland's best-preserved late medieval houses. The priory served as the main residence of the eldest son of the Earls of Kellie into the early 19th century.

Parts of the Priory underwent a significant restoration under Baron William Crawford Miller of Pittenweem during the 1980s and early 1990s.